According to local stories a workforce of 200 men with wheelbarrows and shovels dug the Straight Cut in 1870. The purpose was to get water from the Murray River into the Gunbower Creek. The channel, approximately 4 km long, runs parallel to Brereton Road ending up at the Gunbower Creek a short distance east of the Brereton / Island Road intersection.

The first year after completion a big flood came down the Murray River, through the Straight Cut and flooded Gunbower. As a result the channel was filled in at the Murray River end to block the water using Blue Clay out of Pig Swamp for the centre of the block. It was never used again for its original purpose. For many years Bill Masters kept vigil on the block. Ironically the existing channel was utilised in reverse to bring irrigation water to the farms along it from the creek. The Angus family pumped from the Straight Cut and were said to have grown the first crop of Sub Clover in the district. Their son George Angus was a premiership player who also coached Collingwood.

In years of big floods Wally Worthy from Worthy Bend at the Murray River used the Straight Cut to get his daughters Edna and Sue to the Gunbower Island School by boat. Duncan Leitch, manager at Gunbower Station, pioneered irrigation in the district of Gunbower in 1882. Mr. Leitch pumped water from the Gunbower Creek near the Gunbower butter factory.

In 1888 work started but in June the following year the Kerang Times reported that the coffer dam protecting the works had collapsed and the pump foundations had been destroyed when the Murray River flooded. It took another four years work before the pumps were finally installed and working.

The Steam driven pumps did not work as efficiently as hoped. The boilers burnt 24 ton of wood fuel in 24 hrs and the heavy cogs on the massive wheels made a lot of noise, but despite this the constant supply of water ensured better crops. A spur channel running parallel to the River was dug downstream to Deep Creek by teams of horses pulling scoops. An underground tunnel connected the spur to the Headwork’s water which enabled it to be pumped into Deep Creek which then spilt into Gunbower Creek. The concrete wall built out into the river had a massive iron door 5ft wide and 6ft high set into the bottom which covered an inlet pipe. The door was drawn up during flood time by a winch set in the top of the wall. A vertical shaft located part way along the tunnel allowed air to escape. It is said that two horses died from sheer exhaustion when scooping out the 20ft. deep hole for the tunnel. 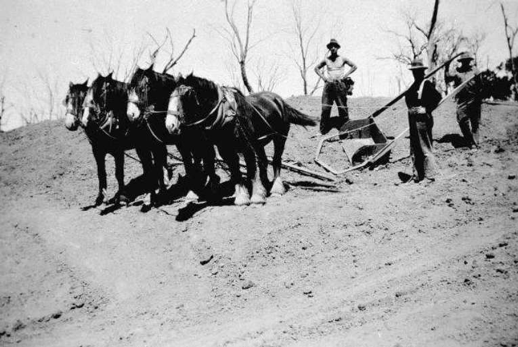 In 1909 the State Rivers and Water Supply commenced works here to build a new pumping plant a short distance upstream from the old headworks. A large boiler was transported by barge and paddle steamer from the Echuca railhead to power two Steam Turbine Thompson Engines and four Weymouth 30 inch pumps.

A loop channel was excavated to link the new plant with the old Cohuna Headwork’s downstream. Working together, both plants would increase the volume and water flow into the Cohuna Main channel giving the district a reliable supply of water for domestic and farm use. Eighty tons of firewood per day, cut into 5 feet lengths, was required to fuel the boiler. In addition another 24 ton of firewood was cut to keep the old plant working. Timber cutters were paid Seven shillings and Sixpence per ton with good workers cutting 4 tons per day. A small settlement evolved with timber cutters, engineers, stokers and boilermakers. Two houses were built for the Manager and Engineer but the workers and families lived in tents and shanties.

Brothers Lenny and Bill Church recalled living at the Headwork’s and their mother taking in up to 30 to 40 boarders, cooking 3 meals a day all done with camp ovens. The children of the Headwork’s attended Gunbower Island School No. 3503 and 45 children were enrolled in the school during that era. The role of the Old and the New Cohuna Headwork’s establishing irrigation in the district cannot be underestimated. 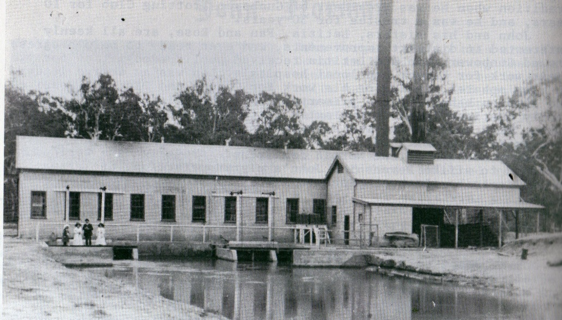 Much of today’s channel system was dug to utilise the water from these Headwork’s. They worked together until the Torrumbarry Weir was constructed in 1923 to hold back the Murray River and allow the water to flow through the National Channel and into the Gunbower Creek system. Both plants were demolished and the machinery was sent to Bendigo by rail for scrap.

In 1890 Kow (Ghow)Swamp National Channel was excavated and the Headwork’s were constructed at the point where the Gunbower Creek takes off from the Murray River. The channel cut off sections of the meandering course of the creek forming several lagoons. Water from the Channel re-joins the Gunbower Creek at Patho. The Gunbower Weir holds back the water to fill Taylors Creek which feeds the Kow (Ghow) Swamp storage reservoir and a series of channels supplying water to properties on the west side of the Murray Valley Highway.

An impressive range of flora and fauna, in addition to stunning natural landscapes and environments.

A range of accommodation within the township, and in close proximity to the Gunbower Creek.

Natural waterways for boating, trails for hiking and scenic areas perfect for birdwatching or painting.